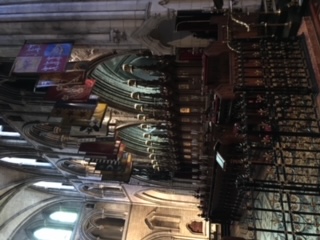 Do you provide a roadblock or easy access to the gospel?

One of the reasons Jesus might have cleansed the temple was because roadblocks had been thrown in the doorway of entering the temple. The mere idea of entering the temple might have become a burden and distraction for many. Moneychangers were in the temple court to help foreigners exchange their money for the acceptable currency. Sellers were in the temple so that someone who could not afford to raise their own animal sacrifice or was unable to bring it from far away could purchase one. In so far as these methods were set up to help people draw near to God and seek his presence, they had instead been turned upside down into a system of extortion and personal gain for the merchants and Jewish authorities overseeing its operations. These money changers and sellers had marked up their prices for personal gain at the expense of people being able to draw near to God.

Another reason Jesus might have cleansed the temple was because there was no longer room for the foreigner or outcast to come and worship. Looking back in 1 Kings 8, when Solomon dedicated the temple, he emphasized that its purpose was for people to seek the presence of God through prayer.

Solomon encouraged all of these to gather in the temple to pray so that “all the peoples of the earth may know (God’s) name and fear (Him).” Jesus witnessed that those Solomon had called to come and seek the Lord in the temple had their hearts’ and minds’ attention transferred away from God in no small part because of someone else’s actions.

The temple was always to be a picture of the gospel: man can dwell in God’s presence because he provides and accepts a sacrifice that pays the penalty for all sins. God draws near to sinful humanity so that we can draw near to him. Our response is to come to God in repentance so that we can be made new and receive forgiveness.

That’s the focus Matthew’s gospel brings into view. We can’t focus solely on Jesus cleansing the temple without seeing who it brings in. The blind and the lame could now enter freely and experience the healing of God.

We, the Church, preach the gospel to ourselves as much as others because we need the constant reminder that it is God who has done the saving work. We need the grace of the gospel at the forefront of everything we do so that we do not add something to others’, and our own, faith they must do in order to earn God’s favor other than repentance.

The storyline of the Bible reaches into our modern-day lives. Where in the past God’s people despite their own good efforts constantly found themselves going off track and getting in the way of his plan; even today we do much the same. We hold tradition over truth. We hold to quality of life over godly character and counting the cost of following Christ. We are God’s people in title but have little of value to show for it. We choose our own way and do what is right in our own eyes. As a result, we become like the moneychangers and sellers in the temple or the authorities allowing them to exist. We become roadblocks to the gospel instead of clearing the way so that as many who want to enter are able without hindrance.

This Easter, may the Lord renew and our hearts and attitudes and cleanse our behaviors so that he is glorified without us getting in the way.